Respect for the fundamental human dignity of all citizens requires us to declare that we do not want to see growing numbers of beggars, tramps and homeless in the cities of Europe. Nor can we countenance a Europe with large numbers of unemployed, growing numbers of poor people and those who have only limited access to health care and social services. These and many other negative indicators demonstrate the current inadequacy of Europe to provide social quality for all its citizens. 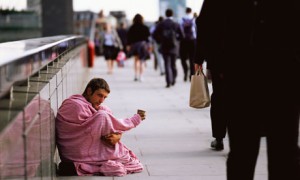 We want, in contrast, a European society that is economically successful, but which, at the same time, promotes social justice and participation for its citizens. This would be a Europe in which social quality is paramount. Its citizens would be able and required to participate in the social and economic life of their communities and to do so under conditions which enhance their well-being, their individual potential and the welfare of their communities. To be able to participate, citizens must have access to an acceptable level of economic security and of social inclusion, live in cohesive communities, and be empowered to develop their full potential. In other words, social quality depends on the extent to which economic, social and political citizenship is enjoyed by all residents of Europe. In a globalized economy competitiveness should go hand in hand with the promotion of social cohesion and the realisation of the full potential of each European citizen. Social quality requires the following basic conditions:

These aspects of social quality must be realised through the recognition of enforceable fundamental rights that are legally binding for all legislators, administrators, and judges. These rights find their limits where corresponding rights of others begin. Social quality in Europe requires that European citizens can rely upon a clear and effective distribution of competencies between the Union, the Member States, and Local Authorities.

European citizens have a right to know who is politically responsible so that, if required, they can question inappropriate policies.

Strengthening the democratic quality of political decision-making at all levels requires that, in this process, the input of the societal organisations and movements concerned is guaranteed.

A globalized economy requires that Europe be fully aware of its social responsibility for the weakest on a global scale.

The European Union is urged:

In our capacity as responsible European citizens we therefore solemnly declare that the European Union should urgently give priority to its social quality; otherwise it will not be the Union we support. Social quality may be the result of a variety of approaches, reflecting the diversity of the nations and peoples of our European Union. Supporting, guaranteeing, and maintaining social quality shall, however, be a constituent element in the making of Europe. The European Union is therefore urged to demonstrate its determination to complement, at Union level, the European social model of its Member States and to protect and adjust it to meet the challenges of the next millennium. Social quality and the European model which underpins it are essential to the creation of an inclusive Europe, a Europe for all citizens.