At the public audience of June 22 2016, Dutch priest Pierre Valkering presented to Pope Francis a selection of farewell speeches held by Father Jan van Kilsdonk sj at funeral ceremonies for gay men, victims of the HIV/AIDS epidemic of the late 20th century. The book, Addio Ragazzo di Luce, was received by the pope with keen interest.

IASQ and the Eurispes Institute have taken the initiative for the Italian translation of this book, originally written in Dutch. 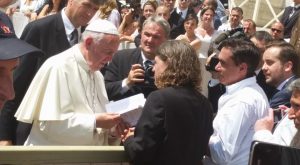 They organized crowdfunding in The Netherlands and Italy. Eurispes and Armando Editore arranged the book’s presentation to the pope. With support by LUMSA University in Rome they also held  a conference about the present-day political and religious meaning of this book. The conference took place on the day of the audience.

As argued in the preface by Marco Ricceri and Laurent van der Maesen, Van Kilsdonk implicitly discussed essential aspects of ‘social quality thinking’. He addressed especially the normative aspects of this theory. Read more on this – and also on the 14th century roots and contemporary relevance of Van Kilsdonk’s work – in the lecture delivered by Laurent van der Maesen of IASQ at the occasion of the conference at LUMSA University. Read also the text of the speech by Gian Maria Fara, president of Eurispes, at the presentation of the book during this conference.

In the late nineties of the last century Father Jan van Kilsdonk sj (1917-2008) of Amsterdam spoke at 70 funerals of gay men, prime victims of the HIV/AIDS epidemic. The book contains an anonymized selection of these speeches and an introduction by Pierre Valkering. It was first published in Dutch by Valkhof Pers in 2013.