Towards Sustainability: an Inside-Out Approach

An initiative by the EFSQ/ISS

Read the Final Report of the Study Group Sustainability and the Recommendations to Policy Makers for the Rio+20 UN Conference on Sustainability June 2012.

Introduction – the need for a new framework 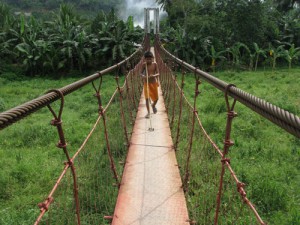 There is a dire need for a new conceptual framework for development toward sustainability in which all perspectives of sustainability are fully integrated. The formulation of such a framework may very well depart from the existing nexus of social quality and human security approaches. (see project Human Security & Social Quality). It will allow the conceptualization of the ‘social’ and the ‘human’ and their interrelationship. In this way it may prepare a new integration of the economic/financial, socio-political and cultural routes or aspects all within physical/biological/ecological boundaries.

This approach is very different from the one currently en vogue: prioritizing all-out economic/financial development, expecting that this will (ultimately) improve social progress, and hoping that technological progress will help limit collateral damage to the environment. Development should be aimed at achieving sustainability. En route to sustainability, social quality should grow and refine. Once sustainability is achieved, social quality – in complementarity to the human security discourses – should be able to continue to grow and refine without further net economic growth. The framework to be developed should allow defining a number of indicators to analyse and understand the results of the ‘development toward sustainability’. These may be existing ones and/or newly formulated ones.

The need for new sustainability indicators, especially those quantifying social progress, is explicitly mentioned in the Report by the European Commission on the Measurement of Economic Performance and Social Progress (Stiglitz, J.E. et al., 2007; www.stiglitz-sen-fitoussi.fr). At any rate, the framework-defined indicators will be compared with approaches already used or proposed: quality of life (European Commission), social capital (World Bank), human development index (United Nations), social harmony (Chinese Government), capabilities (A. Sen and M. Nussbaum), human needs (I. Gough and L. Doyal), and the social quality indicators developed by the European and Asian Foundations on Social Quality.

The conceptual framework will be iteratively tested against practical cases of non-sustainable development, such as land degradation, deforestation, loss of biodiversity, fish stock depletion, accumulation of plastic debris in the oceans, pollution of the atmosphere, climate change, etc., as well as examples of sustainable development, like reforestation, wildlife protection, resource recycling, etc. Perhaps one of the most attractive cases to test the new sustainability framework against is urban development. After all, it is estimated that by 2050 some 80% of the world population will be living in cities. Nowadays cities, even the ones claimed to be very active in fostering sustainability, still draw on a large resource ‘hinterland.’

Aim and scope of this initiative

The study aims at formulating a new conceptual framework for development toward sustainability, starting from social quality and human security considerations, and integrating economic/financial, social/political, technological and cultural strategies, within clear physical/biological/ecological boundaries. This conceptual framework will serve as a basis for the formulation of strategies toward overall sustainability. In essence, the study will be a scientific endeavor. Its results and conclusions will not only be published in scientific journals, but, above all, be presented as a Report at the 2012 Rio+20 Earth Summit.

Background: the Brundtland Commission of the UN

In 1987, the Brundtland Commission published its report ‘Our Common Future’, ‘in which Sustainable Development was defined as: ‘Development that meets the needs of the present without compromising the ability of future generations to meet their own needs.’

The report distinguished three fundamental components of sustainable development: environmental protection, economic growth and social equity. It suggested that these three components can be realized simultaneously and that each country is capable of achieving its full economic potential whilst at the same time enhancing its resource base. Achieving this equity and sustainable growth would require technological and social change.

Five years later, in 1992, the UN Conference on Environmental Development (UNCED) was held in Rio de Janeiro. During this ‘Earth Summit’ (also known as Rio+20), agreements were reached on the action plan ‘Agenda 21’ and on the Convention on Biological Diversity, the Framework Convention on Climate Change and the (non-binding) Forest Principles.

Since the first Rio+20, nearly two decades ago, the need for sustainable development has become all the more pregnant. The work of the IPCC and many others has shown – inter alia – that anthropogenic climate change is underway, that the loss of biodiversity is progressing, that an increasing scarcity of clean water is threatening the lives of hundreds of millions of people and other living beings, and that marine ecosystems are on the decline. In addition, the extreme poverty problem is far from having been solved. In the same time period, 1992-2012, the world economy, in terms of real GDP, will have more than doubled (IMF data), the global, total Greenhouse Gas Emissions (GHG) per year will have increased by more than 40% (DOE/EIA data), the Global Ecological Footprint (a measure for human demand on the biosphere) will have increased by 40% to more than 60% over the world bio-capacity (Data from the Global Footprint Network, 2010), and the world population will have increased with some 1.6 billion people (from approximately 5.38 billion in 1992 to 7.05 billion in 2012, esa.un.org/UNPP).

Interesting in the Brundtland Commission’s definition of the sustainable development is the use of the term ‘needs.’ The ‘needs’ will certainly include those derived from application of the Universal Declaration of Human Rights, but what else? And to what extent and at what cost can the ‘needs’ be met? What will be the ‘own needs’ of ‘future generations?’ Since the 1980s, many thousands of scientific articles, reports, conference proceedings, etc., have dealt with sustainable development in one way or another. Only a minor part of those studies, however, have been dedicated to a multidisciplinary approach of sustainable development, i.e., from a (geo) physical/biological/ecological, economic/financial, technological, social/political and cultural perspective. An even smaller part has entertained sustainable development from the point-of-view of human security and social quality. Yet, understanding the way we think, feel and behave, both as individuals and – together – as a society, with regard to our own vulnerabilities and social quality, is at the heart of any serious attempt at sustainable development, or, rather, development toward sustainability.

Organization of the study group

The group of scientists/professionals that proposes this study is (nearly) entirely Dutch. The main reason for this is fairly practical. The Netherlands is a relatively prosperous, highly developed country. It is also a very densely populated, increasingly multi-cultural nation, with an economy that heavily depends on the economies of other countries and that is an increasing burden on the environment in which it is placed. The Netherlands’ society is, by all means, far from equilibrium from a sustainability point of view.

The group that will undertake this study (presently) consists of: