Social Quality – From Theory to Indicators

This book provided in 2012 the most up to date account of the concept of social quality. In other words it explained the basic assumptions and compared these assumptions to four main ‘ground patterns of thought: (i) mechanical utilitarianism (Vilfredo Pareto cs), (i) constructive voluntarism (Max Weber cs), (ii) dialectical materialism (Karl Marx and Friedrich Engels), and (iv) structural functionalism (Emile Durkheim cs.). Different from mainstream theoretical work after WO11, all those involved delivered a theoretically elaborated concept of ‘the social’. It is the outcome of the dialectic between processes of self realization of human beings and processes of the formation of collective identities, resulting into the whole of production and reproduction relationships at a specific time and place.it has the most affinity with core-elements of the second and third ground-patterns of thought.

This book is the key reference point for the continuing spread and adoption of the concept. It develops the theoretical foundations of social quality and locates it within the main theoretical frameworks of western societal sciences. It provides a clear account of the methods for measuring social quality which includes the initial indicators developed by the ‘European Network of indicators social Quality’ (see the indicators project on this website) , as well as by the ‘European Network on Employment and Social Quality’. In other words, this book can be interpreted as a new theoretical and empirical step to develop the ‘social quality approach’ further, based in particular on a main study about the instrument indicators (EJSQ Volume 5) and a main study on employment seen from the perspective of social quality (EJSQ Volume 3). It can be added that the application of social quality indicators in Southeast Asia and the Pacific since 2007 provides a new dimension to this book.

In particular sense, the book includes an in-depth analysis of the four core components of social quality: socio-economic security, social cohesion, social inclusion and social empowerment and its indicators, and reflect the outcomes of national reports about their application. Then it applies the concept of social quality to some of the most pressing policy challenges, including the future of the European Union and sustainability. For explainable reasons, the book has a limited content. First. It did not compare theoretically and practically the differences with the social quality indicators’ research in Southeast Asia an the Pacific. Second, it did not further elaborate at that time – neither theoretical nor practical -  the constitutional factors, which address the human potentials, capabilities, feelings and perspectives in the light of the changed quality of the conditional factors. Third, nor did it develop the normative factors further – neither theoretically nor practically. It concerns three important targets for the social quality approach, to be addressed in the third decade of this century in the light of the changes and reciprocity of three societal fields (see Theory on this website).  Especially the challenge of sustainability – taken on board in 2010 with the help of a Dutch SQA- think tank -  makes this task all the more compulsive. (For more on this, see Working Paper 11.) 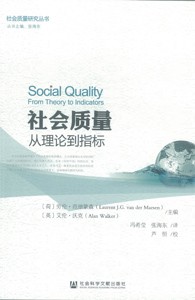 In December 2015 this book has been published in Chinese by the Chinese Social Science Academic Press.

Translation by Feng Xiying under the lead of prof dr Zhang Haidong from Shanghai University.

Read an introduction in English to this publication here.

The introduction also covers the publication in Chinese of the book Social Quality: A Vision for Europe (see below).

Social Quality: A Vision for Europe 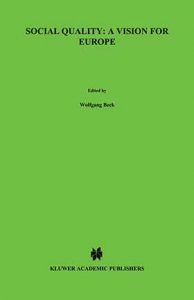 This volume represents the outcome of two years of intensive debate about the future of Europe. It is based on four expert-meetings, discussing and elaborating the 1997 conference papers, to be published in this present book. Thanks to this other scholars are invited to present – with these outcomes in mind – studies about relevant issues connected with the elaboration of the  social quality theory and the hereupon based social quality approach. Finally – and thanks to all this work – it presents the first ‘design’ of the social quality theory. Next to the reflection about the concept of ‘the social’ it elaborates one of the most relevant ideas of this theory, namely the crossing of two axes. First, the horizontal axe concerning the tension between the world of families/ communities (right side) and institutions/organizations (left side).  Second, the vertical axe concerning the tension between biographical transformations (low) and societal transrformations (upper). This constitutes in analytical sense the four quadrants as the circumstances of the four conditional factors respectively, the four constitutional factors respectively and the four normative factors respectively. This paved the way in a decisive way the ‘social quality architecture’, arranging these three sets of factors, each with its own measuring (or interpretation) instruments. It aims to provide the European Union with a vision: one that will unite all of its citizens and help to create the democratic legitimacy that the EU currently lacks. It also builds on the book, The Social Quality of Europe (see below) that introduced the concept and which has been enthusiastically received by both the scientific and policy communities.

The book develops three crucial elements of social quality: the theoretical validity of the concept, its practical application, and its identity or `genetic code' (see the social quality architecture). It establishes an independent identity for social quality, with a unique focus on the quality of the social, which enables it to act as the rationale for all relevant societal politics and policies and,  therefore, an escape route from the dominance of narrow economic thinking in policy making and, by presenting a comprehensive approach, the traditional irreconcilable distribution on disciplines. According to Romano, at that time President of the European Commission, “this makes the book an important and original contribution to the shaping of a new Europe. It will be a valuable resource as we take up the challenges of the 21st Century.” According to Anna Diamantopoulou, Member of the European Commission, responsible for DG Social Affairs and Employment, “This book extends and deepens our understanding of social quality and , therefore, will be an invaluable resource in both the implementation of the new Social Policy Agenda and in the modernization of the European social model”. A stimulating statement that nevertheless makes clear, that the quintessence of this book is not fully understood.

The Amsterdam Declaration on Social Quality

This book has also been used to present the ‘Amsterdam Declaration on Social Quality of Europe’. This was presented solemnly and colorfully to those involved in the Dutch Presidency of the EU in June 1997 and in October 1997 to the President of the European Parliament. It explained the real intention of the social quality approach. Namely that the authors of this Declaration want a Europe in which social quality is paramount. Its citizens would be able to participate and influence in a responsible manner to the nature of their daily circumstances ”under conditions which enhance their well-being, their individual potential and the welfare of their communities. To be able to participate, citizens must have access to an acceptable level of economic security and of social inclusion, live in cohesive communities and be empowered to develop their full potential.” In other words, social quality depends on the extent to which socio-economic/financial, socio-political/legal, and socio-cultural/welfare citizenship is enjoyed by all residents of Europe. And in terms of the year 2020, added should be  that this should contribute to the overall sustainability of human existence on earth.

This book paved the way for at least two major projects, financed by the European Commission and p[anticipating universities. Namely the ENIQ-Project, designing the indicators as instruments for understanding the change of the four conditional factors  and the ENEC-Project, connecting employment politics and outcomes with the social quality approach. 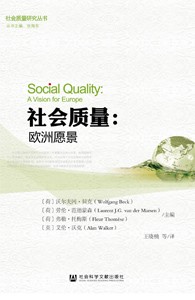 In December 2015 this book has been published in Chinese by the Chinese Social Science Academic Press.

Translation by Wang Xiaonan under the lead of prof dr Zhang Haidong from Shanghai University.

Read an introduction in English to this publication here.

The introduction also covers the publication in Chinese of the book Social Quality - From Theory to Indicators (see above).

The Social Quality of Europe 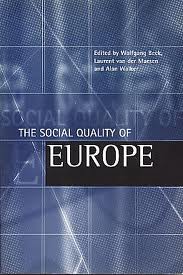 This 1997 book is an outcome of three European expert-meetings, organized by SISWO, the National Interdisciplinary Institute for Social Sciences in Amsterdam, in the 1990s.  It brings together leading European scholars to focus on the essential questions concerning the future of the European Union (EU). It is dedicated to first statements about ‘social quality’  as a comprehensive concept, including economic, political, juridical, sociological, cultural and health disciplines. The intention was to provide starting points  for the European social quality conference, held during the Dutch Presidency of the EU in Amsterdam, June 1997, in order to herald the start of the ‘social quality approach’ (SQA). A common starting point was the outcome of the three expert-meetings of SÏSWO and the work done by the European Commission’s Observatory on Social Cohesion.

According the authors, the book contains the comprehensive and detailed analyses conducted so far of the relationship between EU’s socio-economic, the socio-political and socio-cultural dimensions. At that time, the socio-environmental dimension was not really on the agenda. It introduces an entirely new concept to European discourse - social quality - which will inspire examination and debate from a new perspective. This work consists of specially commissioned original chapters - from experts in the fields of economics, law, political science, social policy, and sociology-together with critical commentaries and syntheses focusing on employment, social protection, social exclusion, and provision for older people. It provides a source of reference on the whole spectrum of societal oriented policies in the EU and aims to set  the agenda for a new debate about the quality of daily circumstances aspired to by European citizens. Therefore the book opens with a referral to the plea of the Comité des Sages (committee of wise people) in 1997, to go beyond the one-sided accent of the EU on the economic and monetary questions. According to this Comité, this one-sidedness will not create a citizens’ Europe . More than twenty years later, these remarks turn out to be of prophetic quality. This was and should be the task of the social quality approach to help change this.

In the Foreword, Pádraig Flynn, member of the European Commission and responsible  for ‘DG of Employment and social Affairs’ at that time, wrote more or less that the European project was designed to bring progress, not to a few, not to a majority, but to all citizens. According to this commissioner, The Dutch Government, during its current Presidency of the European Union, has set out to remind us of the centrality of the Union’s social priorities and to give them a higher political profile in the accelerating process of European integration. Therefore this book of essays and the conference on social quality - which may be appreciated as a commendable work – is an essential contribution for realizing this plea. He explained, that the use of the word ‘Quality’ conveys a sense of excellence, something which is wholly appropriate when considering the breadth and depth of Europe’s social structures. Very soon it became clear, that DG of Employment was looking for arguments to strengthen its position concerning DG of Economic Affairs of the Commission. The ‘social quality approach’ could it be made functional for this politics? This restricted question was quite reasonable, because at this stage the ‘comprehensive meaning’ of this approach was far from clear.